WHAT'S ON IN ORBA AND SURROUNDING AREA

This page gives information on fiestas, public holidays and other events in Orba and the surrounding area.
We'll try to keep this up-to-date as much as possible, but please let us know if you're aware of anything that we haven't included

For information on events taking place in the surrounding area, visit this page. 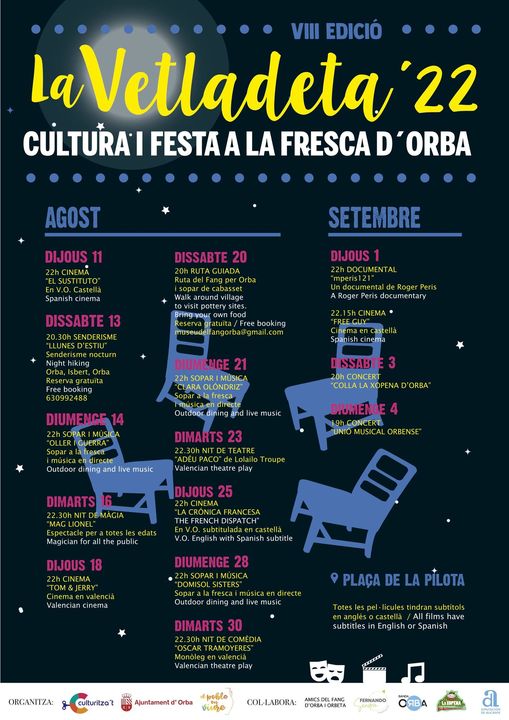 Each town has its Patron Saint and fiestas (Fiestas Patronales) are held in their honour. Orba's Fiestas Patronales take place in May and celebrations include processions with floats, fireworks and pelota games.

Learn about the pottery industry in Orba at this museum on Carrer d'Alacant 10. Information available in Castellano, Valenciano and English. Open Saturday and Sunday from 10am - 2pm, entry €2. Guided tours also available, and occasional workshops.

This is a huge festival held in March only in the Valencia region, where amazing huge papier-mache statues (ninots), often taking a satirical swipe at politicians or celebrities, are erected at various points throughout the city. On the final day of the festival, the sculptures are burned to the ground except for the winning one which is saved! Don't miss the Mascleta every day of the festival at 2pm where the loudest firecrackers in the world are let off and the ground shakes for about 10 minutes! There are regular parades all over the city where Valencianos dress up in their traditional costumes and carry offerings of flowers to the Plaza del Virgen, where a wooden tree shaped structure is filled up with all the flowers. Click here for more information about Las Fallas. Although the main event takes place in Valencia city, it is celebrated on a smaller scale in Denia, Pego, Calpe and Benidorm. If you're interested in learning more about this fascinating festival but can't be there to witness it for yourself, you could visit the Fallas Museum in Valencia.

Easter / Semana Santa
Easter/Semana Santa is one of Spain's main fiesta times, usually celebrated with processions and other events

There are some amazing Moors and Christians processions in the local area. The biggest and probably the best is in the Alicante inland city of Alcoy. Every April the people of Alcoy re-enact the battles between the Moors and Christians in colourful costumes accompanied by kettle drums and trumpets. The two groups fight it out in the streets, which are filled with noise and smoke, watched by thousands of spectators. This fiesta is now officially recognised as being of international tourist interest. Closer to Orba, the one in El Verger in the middle of August (see right) is well worth a mention.